I joined the Kinopio club 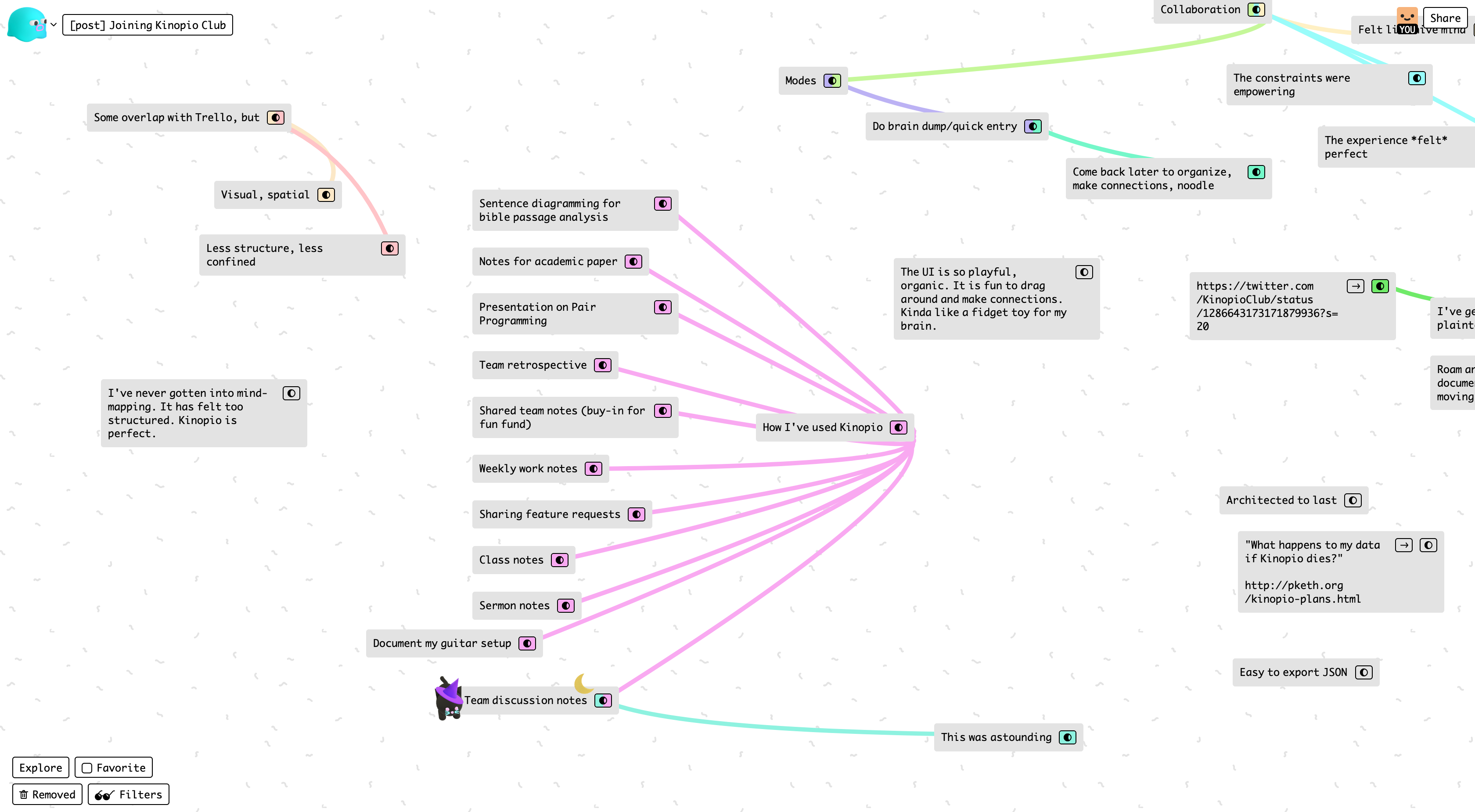 I am currently enamored with Kinopio. It’s designed and crafted by Pirijan K, one of the co-creators of Glitch. He left the company last year and has gone indie with Kinopio. He describes it so:

Kinopio is the visual thinking tool for new ideas and hard problems.

After using it for a month, this rings true to me. The premise is simple. You have cards, which can have text and/or an image. You can put these cards anywhere on your canvas. And then you can connect cards. That’s pretty much it. But that’s the genius behind it.

It is brilliantly executed. The interactions are fast and fun. The cards jiggle when you drag them. The connections obey some laws of physics. This app oozes personality. It’s like a fidget toy for your brain. It feels perfect.

Check out what I’ve used it for so far:

I’ve tried and continue to try tools to capture and organize personal and work information. It’s been a career-long quest. I’ve gravitated towards plaintext solutions, inevitable involving Markdown syntax. But I’m not opposed to systems that are database-backed like Trello, Bear or Notion. I’m not saying I’ve found the holy grail of my quest, but here’s the key for me of why Kinopio is great: It frees me from thinking about organization.

Whenever you take notes, regardless of the app, I am inherently organizing it. Perhaps it is too obvious to state, but text is a linear format. I write some words in a document. Then I wrote more words. I can put those words before or after the existing words. I might try to capture some hierarchy with some Markdown headings or group like ideas by adding blank lines. But the nature of the format is there is some friction with moving these thoughts and ideas around. And it is difficult to express relationships outside of a strict outline-based hierarchy. An idea can only practically be under a single heading.

Kinopio really shines for taking notes in a lecture or a group meeting. The genius of Kinopio is how effortless it makes moving my thoughts around and drawing connections. Indeed, when writing down a thought, I do have to decide where to position it on the canvas. But since the friction is so low to move a card, I am not committed to whatever organization I currently have in mind. It can evolve, and when it does, the tool lets me do that.

On top of that, I can easily make connections between thoughts, even if they are not close in proximity. Let’s say the speaker revisits a concept she introduced earlier in the talk. It feels so natural to connect those two ideas on the canvas.

Kinopio worked incredibly for a team discussion where I could quickly capture the various opinions my teammates were sharing (often on varying topics), and then iteratively organize and connect concepts together. It was like having a staging area for my brain.

You can use Kinopio in real-time with others. I used this for our retrospective. Our current tool is Trello. It works well and the structure of lists is compatible with how we run our retros. But the spatial and visual aspect of Kinopio made the experience really fun. Erik shared this:

I recently participated in a virtual summit where we primarily used Miro as the collaboration tool. Miro has so many bells and whistles. It tries to mimic the real world, but to a fault. I find all the options exhausting and cumbersome. I don’t want to fiddle with the size, color, shape of my stickies. In a virtual summit, the facilitators were literally creating stacks of virtual stickies. Huh? It was to establish some uniformity in the stickies (because there are too many options.)

Yes, Miro is powerful and strives to do much more than Kinopio. I get it. It’s neat that you can zoom way in and zoom way out, and the canvas feels virtually infinite. And it handled two dozen users simultaneously very well. But it was a good contrast with the areas that it overlaps with Kinopio.

One feature that would open up more possibilities for Kinopio to be used for collaboration sessions would be a way to denote specific areas on the canvas. For example, imagine in the analog world’s whiteboard: you can draw a box, label it, and tell everyone to put their stickies in that box. So, something like this. It would provide an additional way to organize and group cards.

Compared with other tools #

Some other tools that come to mind in this space are Trello and outliners. The main thing is that these tools are too structured for thought. Trello forces me to put cards into a list. I’ve never gotten into outliners because I always get stuck when trying to put my thoughts in a hierarchy. When using plaintext, the problem I always have is keeping all my thoughts visible. There’s a good argument to create a new file per concept. But once you try to take a step back and look across concepts, it gets really hard. Files don’t lend themselves to be easily viewed and manipulated.

The latest hotness are Zettelkasten and Roam. They seem like smart systems, but they have a steep learning curve and require investment up front. The idea of auto-linking concepts is neat, and I don’t doubt that it works. But it all feels a bit heavyweight and prescriptive to me.

That takes me back to the feels. Not only do the interactions in Kinopio feel great, but the business approach feels straightforward and sound, too. You can use for free and create up to 150 cards. If you want to create more, you pay $4/month. Pirijan reassuringly states:

So if I can’t afford to run the kinopio server anymore, I can just switch it off and you can continue to use Kinopio as you do now – with all your data intact.

You can easily export all your data, and there’s an API available. (Aside: I’ve created a simple shell script for quickly adding a card to a space.)

The creator has cranked out many fixes and features in the month I’ve been using the tool. I appreciate the many posts and artifacts he produces related to development, design, and the whole venture. You can check out @KinopioClub as well as the Are.na channel. He has been super cool with taking feedback and suggestions, too!

Since I started working on this post, Pirijan has added image and mp3 uploads. That inspires me to use the tool for a narrated photo album of sorts. There are lots of fun and interesting spaces to explore. Go and check it out for yourself:

While you’re there, come write on my wall.